So, I like beer, that pretty much the main theme of this blog. Its going to be abut how I like beer and the many different beers that I drink and how much I like them, or don't like them. Basically the blog starts on a Sunday night out in the fine city of Birmingham. I'd been to a few pubs and found myself wandering into the Post Office Vaults. Now I've been in there a fair few times since it opened and I like it but I've never been what you would call a regular. The staff are friendly, the selection of beer is interesting, over 300 different bottled beers, and I like the occasional game of bar billiards. However it can be overcrowded and very hot at times.

This time I went in with some friends and ended up chatting to a nice Irish lady at the bar. She was murdering the pronunciation of La Chouffe which she was trying to order at the bar. While talking she told me about the Post Offfice Vaults new beer passport. The basic deal is they have listed 200 of their bottled beers and if you try them all you are rewarded with a crate of beer, a t shirt and your picture on the wall of fame. I was instantly hooked and so this blog will detail my journey through this list of beers and hopefully help me to remember which ones I liked and which ones I didn't. 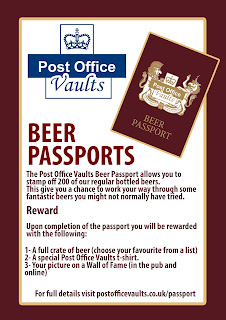 Posted by Birmingham Beer Drinker at 10:05